The medal, designed by Otto Placzek of Berlin, consists of an outer laurel wreath of oak leaves with the national emblem of an eagle clutching a swastika (both golden coloured) at its apex. The central area features a representation of a sea mine exploding. The medal was first produced in bronze and later in zinc. Inferior quality late-war versions can appear a dull gray as the gold gilt was known to wear off.[2]

The medal was worn on the lower part of the left breast pocket of the naval service tunic, underneath the 1st class Iron Cross if awarded, or equivalent grade award.[1]

Award of this medal could derive from:[1]

After the official establishment of the West German government in 1949, and the sub-subsequent founding of the new German Navy in 1956, the Bundesmarine found most of its ships crewed by former Kriegsmarines.

Following a similar directive as the rest of the Bundeswehr, the Bundesmarine began to re-issue several de-nazified medals which had been previously earned and issued during WW2. The decision to re-issue these medals was made after a Federal decision in 1957 to re-issue a select number of medals pertaining to combat and civilian service with the Wehrmacht (Nazi party medals were not re-issued). These medals were re-issued to retired and active members of the former Kriegsmarine. Members of the Bundesmarine who had not served during the war were not eligible to receive this medal. 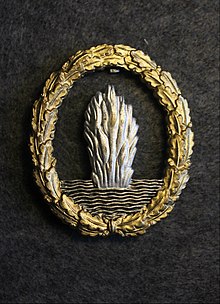 These 1957 re-issued medals are identical in most respect to their wartime equivalents, the most prominent difference being the removal of the German eagle and Swastika. Post-war Minesweeper medals were produced by a wide variety of German medal manufacturers between the 1960s–1980s.[3] These new medals often do not bear a makers mark. They also sometimes utilize some newer medals in their construction.