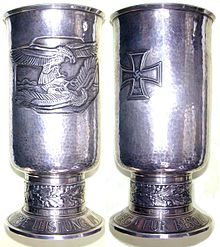 The Ehrenpokal der Luftwaffe (Honor Goblet of the Luftwaffe) was a Luftwaffe award established on 27 February 1940 by Reichsmarschall Hermann Göring, the Reich Minister of Aviation and Commander-in-Chief of the Luftwaffe. It was officially known as the Ehrenpokal "für Besondere Leistung im Luftkrieg", or Honor Goblet "For Special Achievement in the Air War". The award was given only to flying personnel (pilots and aircrew).[1] Recipients' named were published in the periodical Ehrenliste der Deutschen Luftwaffe (Honor List of the German Air Force). German archives indicate that approximately 58,000 were given "on paper", but only 13–15,000 goblets were actually awarded according to the records.[2] The first airman to receive the goblet was Oberstleutnant Johann Schalk on 21 August 1940.[3]

The award was made to aircrew who had already been awarded the Iron Cross First Class but whose performance was not considered to merit the German Cross or Knight's Cross of the Iron Cross. It was replaced by the Luftwaffe Honour Roll Clasp in January 1944.[1]

The actual goblet was produced in two materials, fine silver (German: Feinsilber) or also in German Silver (German: Alpaka) or Nickel silver. The size is about 200 mm tall x 100 mm in diameter. The goblet was produced in two pieces which were fitted together into one unit. The obverse depicts two eagles in mortal combat, while the reverse bears an Iron Cross in high relief. Oak leaves and acorns adorn the stem. The legend "Für Besondere Leistung im Luftkrieg" are formed into the base.[1] 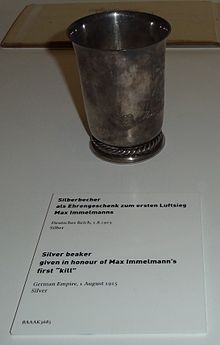 Although Göring considered the "Honor Goblet of the Luftwaffe" to be his "personal creation", it was not an original idea. It was based on a World War I aviation award,[1] the Ehrenbecher für den Sieger im Luftkampf, or Honor Goblet for the Victor in Air Combat. This award was generally given upon one's first victory in aerial combat (although the actual award bestowal might come some time after the victory). It has been reported (although the late aviation historian Neal O'Connor, was unable to confirm it before his death), that the requirement for aerial victories may have increased later in the war, since air combat became more common. The total number of awards presented is unknown, but it was fewer than its World War II successor.

Among notable recipients of the Ehrenbecher für den Sieger im Luftkampf were:

The Imperial German Navy had its own aviation forces in World War I, and created its own non-portable award for victory in aerial combat. This was the Ehrenpreis für Vernichtung eines feindlichen Flugzeugs, or Honor Prize for the Destruction of an Enemy Aircraft. This was not a goblet, but a trophy of two eagles engaged in a mid-air fight.

There was also another, even more rare, Imperial German award, the Ehrenbecher für erfolgreiche Angriffe aus der Luft, or Honor Goblet for Successful Attacks from the Air. This was apparently only bestowed a very few times to members of bomber or Zeppelin crews for successful attacks.