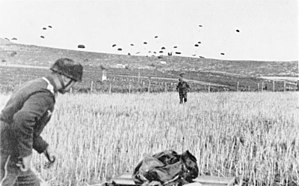 German paratroopers landing on Crete, May 1941

The Crete Cuff Title, or Crete Cuff Band, (German: Ärmelband Kreta) was a World War II German military decoration awarded to Wehrmacht servicemen who took part in the battle of Crete between 20 and 27 May 1941.

While a number of German units had worn cuff titles as part of their regimental or corps insignia, this was the first World War II operation where a cuff title was awarded as a campaign award.[2]

As part of Germany's Balkan campaign, the Wehrmacht invaded the island of Crete on 20 May 1941. About 22,000 paratroopers and mountain troops took part, delivered by transport aircraft, gliders and naval vessels and supported by bomber and fighter aircraft.[3] After two weeks of fierce fighting, the defending Greek and British Commonwealth troops had either surrendered or been evacuated.

The cuff title was instituted separately by each of Germany's armed services:

While the conditions of eligibility differed between the three services, the broad qualifying criteria were that, between 20 – 27 May 1941, a member of the German armed forces would have to:

The cuff title was distributed for wear from mid-1943. The deadline for applications was 31 October 1944.[2]

The cuff title is 32mm wide and consists of a yellow-edged white cloth band, embroidered in yellow silk or cotton thread with the word KRETA flanked on both sides by a spray of acanthus leaves.[2] The design was the same for all three armed services.[4]

The band was worn on the lower left sleeve of the uniform, including on greatcoats.[4] Where two or more campaign cuff titles were awarded, the earliest qualified for was correctly worn above later awards, although this regulation was not always followed.[2]

Nazi era decorations were banned after the war. The Crete Cuff Title was among those re-authorised for wear by the Federal Republic of Germany in 1957.[5] While many awards were re-designed to remove the swastika, the original cuff title could be worn unaltered as it did not bear this symbol.[6] Members of the Bundeswehr who were qualifying veterans wore the award on their ribbon bar, represented by a small replica of the cuff design on a yellow-edged white ribbon.[7]