Nice set of cuffs of a German Waffenrock with special buttons. 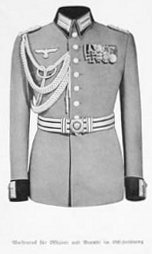 WWII model of the Waffenrock

Waffenrock ([also Waffenkleid] English: surcoat or tunic) was originally a medieval German term for an outer garment,[1] worn by knights over their armor.[2]

Later, Waffenrock became the generic term for any military uniform, including dress and parade uniforms, and also referred to epaulettes or shoulder boards with rank insignia, as well as uniform cuffs, badges and other insignia. As of 1945, the term is no longer in use by German speaking armed forces, though the Swedish term for a military tunic is the cognate vapenrock.

Waffenrock was derived from the substantive wâfenroc or wâpenroc ("weapon tunic") of knights. It was often made from expensive silk cloth. The colours of this cloth corresponded to those on the shield quartering. In spirit of this, the heraldic figures on the coat of arms were frequently designed by gold and silver embroidery.

In the Prussian Army, the service coat was common called Montierung. It was renamed to Soldatenrock ("soldier's tunic") in October 23, 1842, by the Prussian cabinet order of His Majesty (German: allerhöchste Kabinettsorder). In 1843, it was finally renamed to Waffenrock.[3] All German-speaking armies commonly used this wording, except for the Austro-Hungarian Army (later Austrian Army), where the designation Adjustierung was in use.

In its Wehrmacht form as issued in 1935, it was a formfitting thigh-length eight-button tunic of fine feldgrau wool, without external pockets. The collar was taller than the service tunic and bore more elaborate Litzen, embroidered all in silver-white and mounted on Waffenfarbe backing; smaller Ärmelpatten, similar in appearance to Litzen, appeared under the buttons on the dark-green Swedish cuffs. Waffenfarbe piping also edged the collar, cuffs, front closure, and scalloped rear vent.

Officers wore a formal belt of silver braid. Trousers were steingrau, with the outer seams piped in Waffenfarbe. In the full-dress uniform (grosser Gesellschaftanzug) the Waffenrock was worn with medals, aiguillette (officers), trousers and shoes, the Schirmmütze, gloves, and sword (officers/senior NCOs) or dress bayonet (enlisted). Parade dress substituted the steel helmet and jackboots. Semi-formal (kleiner Gesellschaftanzug) and walking-out (Ausgangsanzug) uniforms were as full-dress, but without aiguillette and with ribbons replacing medals.

Production and issue of the Waffenrock was suspended in 1940, and either the service or the officers' ornamented uniform was worn for dress occasions instead. However, the Waffenrock remained authorized for walking out for those who had or could purchase it; and it was a widespread if unauthorized practice to loan a soldier a Waffenrock from regimental stocks to get married in, as evidenced by many wartime wedding photos.

The gallery below shows examples of Waffenrock over the suit of armor.

The gallery below shows Waffenrock examples until 1945.