The Air Medal (AM) is a military decoration of the United States Armed Forces. It was created in 1942 and is awarded for single acts of heroism or meritorious achievement while participating in aerial flight.[5]

The Air Medal was established by Executive Order 9158, signed by Franklin D. Roosevelt on May 11, 1942. It was awarded retroactive to September 8, 1939, to anyone who distinguishes himself by meritorious achievement while serving with the Armed Forces in aerial flight.[5][6][7]

The original award criteria set by an Army Policy Letter dated September 25, 1942, were for one award of the Air Medal:[8]

These criteria were altered by the commanding generals of each numbered Air Force to fit the conditions of their theater of operations and to maintain morale. The Distinguished Flying Cross would usually be awarded for roughly twice to five times the requirements of the Air Medal. This led to automatic "score card" awards of the Air Medal and Distinguished Flying Cross for completing a set number of operational missions rather than distinguished service, meritorious action, or bravery, as had been intended. On August 5, 1943, such score card awards were officially abolished by a Headquarters Army Air Forces Awards Board memorandum due to the embarrassment when airmen received the Air Medal for "score carding" five missions or more but were later removed from flying duties for "lack of moral fibre". Commanders could still issue the awards on those grounds, but the recipient must perform exceptional or meritorious service as well.

During World War II, the medal's award criteria varied widely depending on the theater of operations, the aircraft flown, and the missions accomplished. In Europe, the airspace was considered completely controlled by the enemy and heavy air defenses were encountered, so the criteria were altered from those of the original medal. Bomber, photographic reconnaissance, or observation crewmembers and air transport pilots received it for five sorties, fighter pilots received it for ten sorties, and individual pilots or air crewmen received one award per enemy aircraft shot down. Elsewhere in the Pacific and the China Burma India Theater, the pilots and crews flew mostly over uncontrolled or contested airspace for long hours and lighter air defenses were encountered, so much higher criteria were used. Anti-submarine patrols from the United States could qualify for the medal if an airman logged 200 hours of flight time.[9]

The Air Medal may be awarded to recognize either single acts of merit or gallantry in combat or for meritorious service in a combat zone. Award of the Air Medal is primarily intended to recognize those personnel who are on current crew member or non-crew member flying status which requires them to participate in aerial flight on a regular and frequent basis in the performance of their primary duties. However, it may also be awarded to certain other individuals whose combat duties require regular and frequent flying in other than a passenger status, or individuals who perform a particularly noteworthy act while performing the function of a crew member but who are not on flying status. These individuals must make a discernible contribution to the operational land combat mission or to the mission of the aircraft in flight.[10]

Examples of personnel whose combat duties require them to fly include those in the attack elements of units involved in air-land assaults against an armed enemy and those directly involved in airborne command and control of combat operations. Examples would be transport performing supporting "Dustoff" Medevac or resupply operations, or aircraft involved in reconnaissance over hostile airspace. Awards will not be made to individuals who use air transportation solely for the purpose of moving from point to point in a combat zone.

The Army may award the Air Medal for peacetime service, but approval authority is by general-grade officers at the group or brigade level or higher. The Air Force does not award the Air Medal for peacetime sustained operational activities and flights. Non-combat meritorious service is instead awarded the Aerial Achievement Medal, instituted in 1988.

The United States Air Force does not utilize numeral devices on the Air Medal. Subsequent awards are annotated with the traditional oak leaf clusters (or OLCs). Enlisted members are also awarded three points toward promotion per award.

Each ribbon carries a maximum of four OLCs; the ribbon signifies the first award, a bronze OLC equals one additional award, and a silver OLC represents five additional awards. If there were more than four OLC devices awarded (like the 10th, 14th, 15th, 18th, 19th, and 20th awards), extra Air Medal ribbons were issued to wear the extra OLCs (although only one Air Medal was awarded). Multiple Air Medals were usually earned by aircrew with extensive flight time and long meritorious service records, like during World War II or Korea.

The award of the medal is sometimes denoted on a member's gravestone with the abbreviation "AM" followed by an ampersand and the number of oak leaf clusters or "OLC". For example, "AM&5 OLC" means Air Medal and five oak leaf clusters.

One award was credited per every 25 hours of combat assault flights (any flight in which the aircraft was directly involved in combat), 50 hours of combat support flights (Visual Reconnaissance or Resupply), or 100 hours of non-combat service flights (Administrative or VIP flights). Flight hours were calculated in six-minute blocks.

In 1968 numerals replaced the oak leaf clusters to simplify their display.

During the Vietnam War, the US Army awarded the Air Medal to Warrant Officer or Commissioned pilots and enlisted aircrew for actual flight time (awards were also made to infantry troops who flew on combat assault missions). This became a bureaucratic nightmare to correctly log because of the short flight time of typical helicopter flights. Later, an equivalent "flight hours" conversion was created and an award standard was set by individual commands. This eventually was standardized in theater to one award per every 24 "flight hours" logged.[11] A simplified set time was awarded depending on the type of mission, regardless of the actual flight time.[11] Administrative or VIP flights counted for a quarter hour, regular duties (such as Visual Reconnaissance or Resupply) counted for a half hour, and hazardous duties (combat assaults or extractions) counted for one hour. Pilots and aircrew could log over 1,000 "flight hours" a year and earn a 40 or higher numeral on their Air Medal ribbon.

The "score card" system was retained after the war. This was changed on December 11, 2006, to an award for every six months of meritorious service instead of the number of flight hours.

Currently (as per AR 600-8-22 [December 11, 2006])[12] the medal can be awarded for every six months of meritorious service. The recipient must perform flight-related duties while serving in a combat zone. The number of flight hours logged is no longer a criterion. The soldier must be assigned as air crew with flight status (i.e., as a pilot, navigator, or gunner). Soldiers without flight status can be eligible if they help with an aerial attack during general transport (e.g., as a door gunner), serve as a combat controller (e.g., as a Pathfinder or Forward Air Controller) or the combat commander of an air or land operation at the Group or Brigade level or lower. Soldiers being transported by air as passengers are not eligible for the meritorious service award, but they may be eligible for the gallantry award. 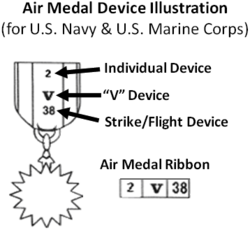 Officers of Captain (USN) or Colonel (USMC) rank and above are not eligible for award of the Air Medal on a Strike/Flight basis unless the sorties they fly are required in the performance of their regular duties.

In the interval between November 22, 1989, and September 27, 2006, 3⁄16 inch bronze stars, 5⁄16 inch gold stars, and 5⁄16 inch silver stars denoted the number of "Individual" Air Medals. A bronze star was used to denote a first award. Gold stars were used for the second through the fifth awards, seventh through tenth awards, and so on. Silver stars were used in lieu of five gold stars, and denote the sixth and eleventh (and so on) awards. For "Individual" Air Medals, the Combat "V" may be authorized.

The Coast Guard awards the "Individual" Air Medal but not the Strike/Flight Award.

During World War II, the Air Medal was also awarded to members of the Civil Air Patrol who participated in the CAP's anti-submarine patrol program.[14] This was not made public at the time, since the Federal government did not want to admit it was arming civilian aircraft.

The medal's design is prescribed by law.

Description: A Bronze compass rose 111⁄16 inches circumscribing diameter and charged with an eagle volant carrying two lightning flashes in its talons. A fleur-de-lis at the top point holds the suspension ring. The points of the compass rose on the reverse are modeled with the central portion plain for engraving the name of the recipient.

Ribbon: The ribbon is 13⁄8 inches wide and consists of the following stripes:

Components: The following are authorized components of the Air Medal and the applicable specifications for each:

Designer: Walker Hancock. Hancock had competed for the medal design as a civilian, but prior to the award of the competition had been inducted into the army.[5]