General Hans von Seeckt, Chief of the Reichsheer together with infantry men at a military manoeuvre in Thuringia, 1926 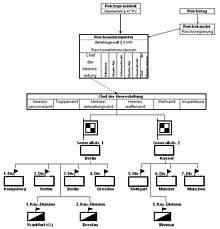 The Reichswehr (transl. Realm Defence) was the unified armed forces of the Weimar Republic from 1921 to 1935. It consisted of the Reichsheer (army), and the Reichsmarine (navy). After the Imperial German Army had been dissolved in January 1919 and was to be transformed into a peace army, the Reich government decided in March 1919 to form a provisional Reichswehr. Due to the conditions of the Versailles Treaty of 1919, the scope and armament of the Reichswehr were subject to severe restrictions. After the "regaining of military sovereignty" (reintroduction of compulsory military service, etc.) announced by Adolf Hitler in 1935, the Reichswehr was reorganised into the new Wehrmacht. The Reichswehr acted as a state within a state, and its leadership was an important political power factor within the Weimar Republic. The Reichswehr partly supported the democratic form of government, as in the Ebert-Groener Pact, and partly it supported anti-democratic forces with the "Black Reichswehr". The Reichswehr saw itself as a cadre army, which should receive the expertise of the old imperial military and thus form the basis for rearmament.

At the end of World War I, the forces of the German Empire were disbanded, the men returning home individually or in small groups. Many of them joined the Freikorps (transl. Free Corps), a collection of volunteer paramilitary units that were involved in suppressing the German Revolution and border clashes between 1918 and 1923.

The Reichswehr was limited to a standing army of 100,000 men,[1] and a navy of 15,000. The establishment of a general staff was prohibited. Heavy weapons such as artillery above the calibre of 105 mm (for naval guns, above 205 mm), armoured vehicles, submarines and capital ships were forbidden, as were aircraft of any kind. Compliance with these restrictions was monitored until 1927 by the Military Inter-Allied Commission of Control.

On 30 September 1919, the army was reorganised as the Übergangsheer (transl. Transitional Army), and the force size was reduced to 20 brigades.[2] About 400,000 men were left in the armed forces,[3] and in May 1920 it further was downsized to 200,000 men and restructured again, forming three cavalry divisions and seven infantry divisions. On 1 October 1920, the brigades were replaced by regiments and the manpower was now only 100,000 men as stipulated by the Treaty of Versailles.[2] This lasted until 1 January 1921, when the Reichswehr was officially established according to the limitations imposed by the Treaty of Versailles (Articles 159 to 213).

The Reichswehr was a unified organisation composed of the following (as was allowed by the Versailles Treaty):

Despite the limitations on its size, their analysis of the loss of World War I, research and development, secret testing abroad (in co-operation with the Red Army) and planning for better times went on. In addition, although forbidden to have a General Staff, the army continued to conduct the typical functions of a general staff under the disguised name of Truppenamt (transl. Troop Office). During this time, many of the future leaders of the Wehrmacht – such as Heinz Guderian – first formulated the ideas that they were to use so effectively a few years later.

State within the state

In 1918, Wilhelm Groener, Quartermaster General of the German Army, had assured the government of the military's loyalty.[5][6] But most military leaders refused to accept the democratic Weimar Republic as legitimate and instead the Reichswehr under the leadership of Hans von Seeckt became a state within the state that operated largely outside of the control of the politicians.[7] Reflecting this position as a “state within the state”, the Reichswehr created the Ministeramt or Office of the Ministerial Affairs in 1928 under Kurt von Schleicher to lobby the politicians.[8] The German historian Eberhard Kolb wrote that

…from the mid-1920s onwards the Army leaders had developed and propagated new social conceptions of a militarist kind, tending towards a fusion of the military and civilian sectors and ultimately a totalitarian military state (German: Wehrstaat).[9]

The biggest influence on the development of the Reichswehr was Hans von Seeckt (1866–1936), who served from 1920 to 1926 as Chef der Heeresleitung (transl. Chief of the Army Command) – succeeding Walther Reinhardt. After the Kapp Putsch, Hans von Seeckt took over this post. After Seeckt was forced to resign in 1926, Wilhelm Heye took the post. Heye was in 1930 succeeded by Kurt Freiherr von Hammerstein-Equord, who submitted his resignation on 27 December 1933.

The forced reduction of strength of the German army from 4,500,000 in 1918 to 100,000 after Treaty of Versailles, enhanced the quality of the Reichsheer because only the best were permitted to join the army.[citation needed] However the changing face of warfare meant that the smaller army was impotent without mechanization and air support, no matter how much effort was put into modernising infantry tactics.

The reduction in size of the German Army by Versailles had another effect as it prevented the accumulation of trained reservists, significantly affecting the outcome of World War II. Even though the USSR had about 5 million soldiers during the initial German invasion, it had over 14 million reservists available whereas, Germany's trained manpower reserves essentially ran out after the first months of Barbarossa.[10]

During 1933 and 1934, after Adolf Hitler became Chancellor of Germany, the Reichswehr began a secret program of expansion. In December 1933, the army staff decided to increase the active strength to 300,000 men in 21 divisions. On 1 April 1934, between 50,000 and 60,000 new recruits entered and were assigned to special training battalions. The original seven infantry divisions of the Reichswehr were expanded to 21 infantry divisions, with Wehrkreis headquarters increased to the size of a corps HQ on 1 October 1934.[11][12] These divisions used cover names to hide their divisional size, but, during October 1935, these were dropped. Also, during October 1934, the officers who had been forced to retire in 1919 were recalled; those who were no longer fit for combat were assigned to administrative positions – releasing fit officers for front-line duties.[13]

Transition to the Wehrmacht

Reichsheer soldiers swear the Hitler oath in August 1934, with hands raised in the traditional schwurhand gesture

The National Socialist Party came to power in Germany in 1933. The Sturmabteilung (transl. Storm Battalion; abbreviated SA), the Nazi Party militia, played a prominent part in this change.[citation needed] Ernst Röhm and his SA colleagues thought of their force – at that time over three million strong – as the future army of Germany, replacing the smaller Reichswehr and its professional officers, whom they viewed as old fogies who lacked revolutionary spirit.[citation needed] Röhm wanted to become Minister of Defense, and in February 1934 demanded that the much smaller Reichswehr be merged into the SA to form a true people's army.[citation needed] This alarmed both political and military leaders, and to forestall the possibility of a coup, Hitler sided with conservative leaders and the military. Röhm and the leadership of the SA were murdered, along with many other political adversaries of the Nazis, including two Reichswehr generals, in the Night of the Long Knives (30 June – 2 July 1934).

The secret programme of expansion by the military finally became public in 1935. On 1 March 1935, the Luftwaffe was established. On 16 March 1935, Germany introduced conscription – in violation of the Treaty of Versailles. In the same act, the German government renamed the Reichswehr as the Wehrmacht (transl. defence force). On 21 May 1935, the Reichsheer was renamed the Heer (transl. Army) and the Reichsmarine the Kriegsmarine.[14]