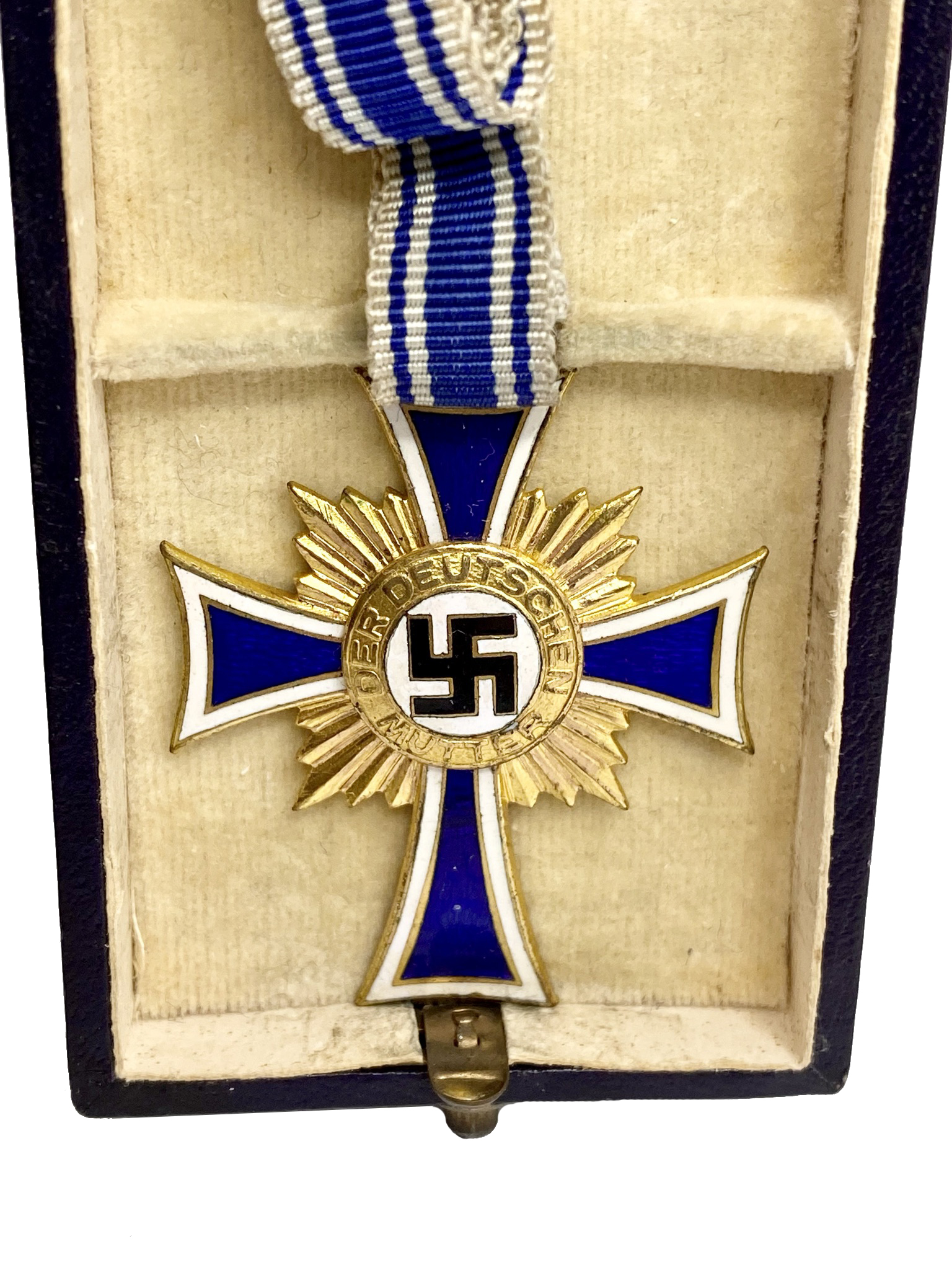 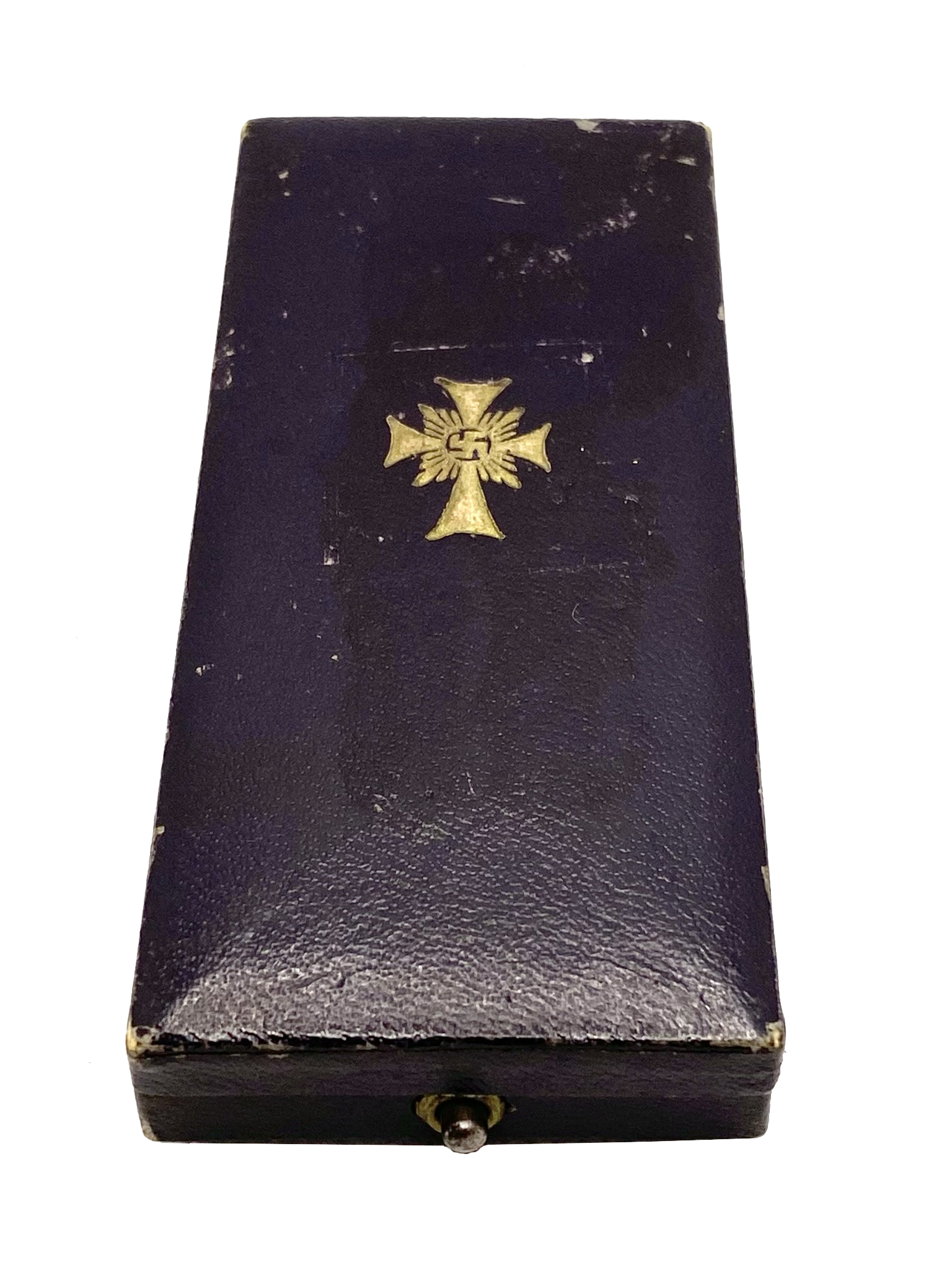 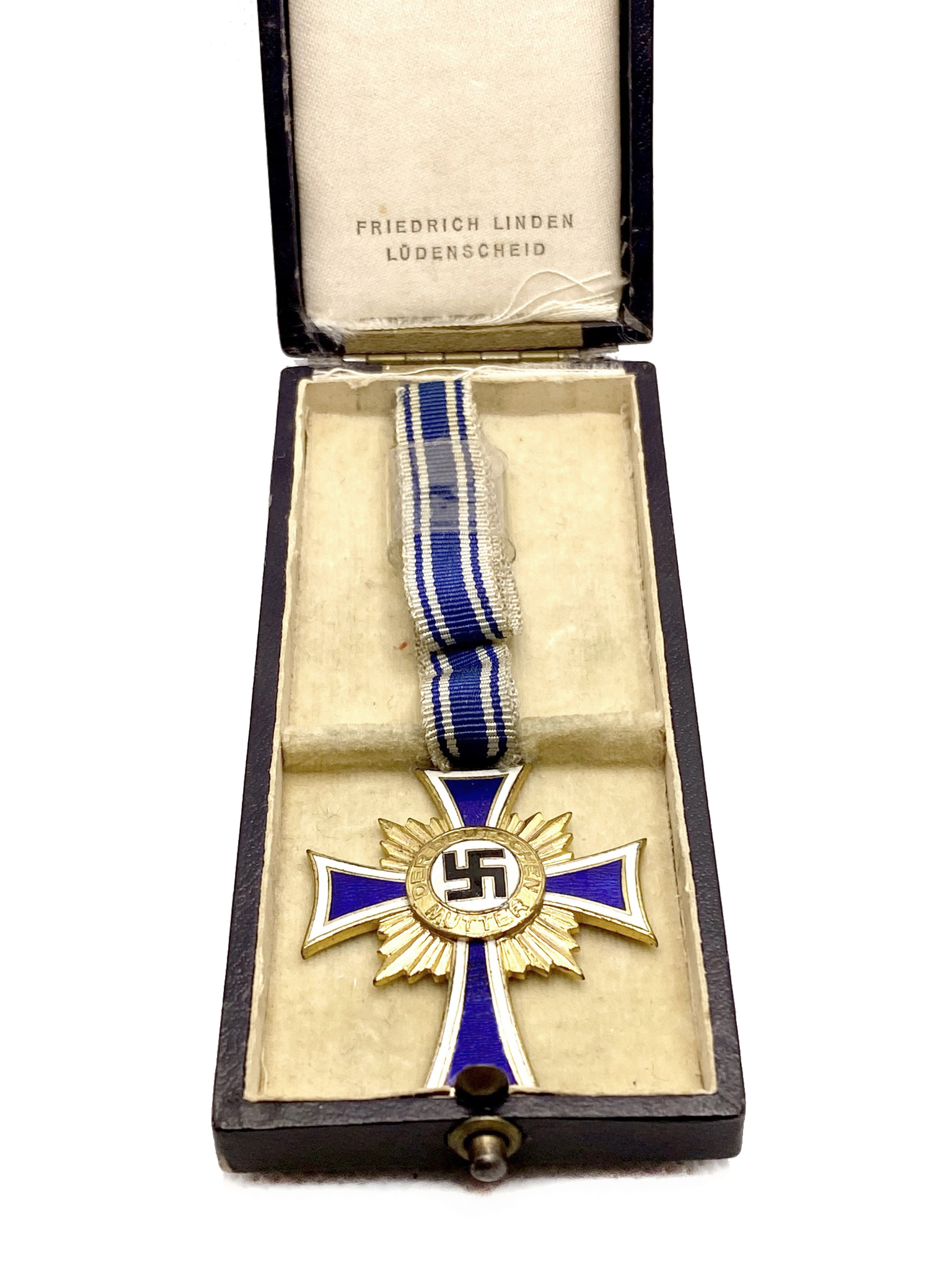 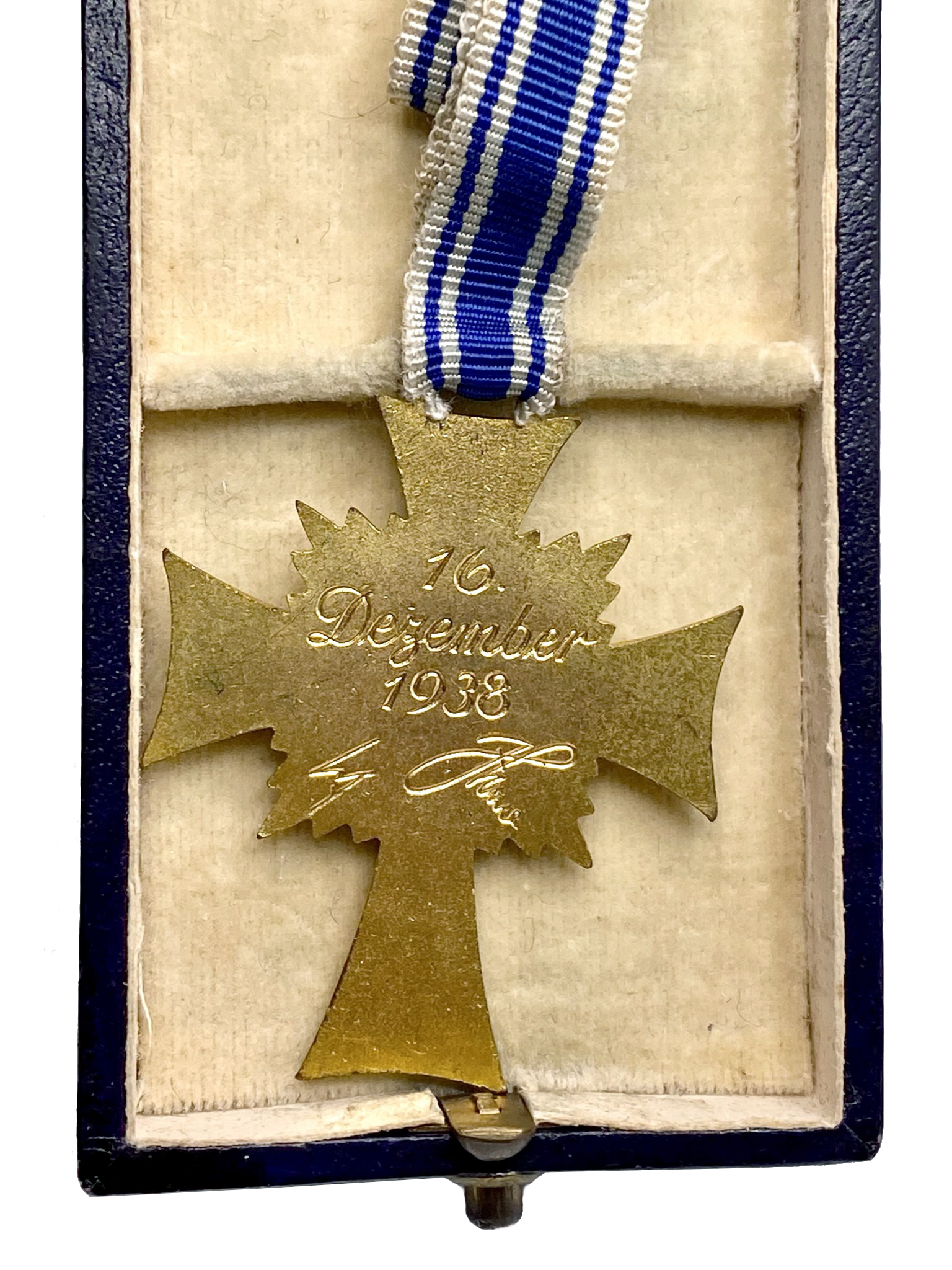 The Cross of Honour of the German Mother (German: Ehrenkreuz der Deutschen Mutter), referred to colloquially as the Mutterehrenkreuz (Mother's Cross of Honour) or simply Mutterkreuz (Mother's Cross), was a state decoration conferred by the government of the German Reich[1][2] to honour a Reichsdeutsche German mother for exceptional merit to the German nation.[2][3][4] Eligibility later extended to include Volksdeutsche (ethnic German) mothers from, for example, Austria and Sudetenland, that had earlier been incorporated into the German Reich.[4]

The decoration was conferred from 1939 until 1945[5] in three classes: bronze, silver, and gold,[2][6] to Reichsdeutsche mothers who exhibited probity, exemplary motherhood, and who conceived and raised at least four or more children in the role of a parent.[7][8] A similar practice, that continues to this present day, was already established in France since 1920, by conferring the Médaille de la Famille française (Medal of the French Family), a tribute to the French mother who raised several children in an appropriate way.

In recognition of the substantial importance a woman's role and motherhood was in support of a strong Germany,[4][7][8][9] the Cross of Honour of the German Mother was introduced by decree in Berlin on 16 December 1938 by Führer und Reichskanzler (leader and chancellor) Adolf Hitler.[1] The preamble of the statutory decree declared:

The crosses were awarded annually on the second Sunday in May (Mothering Sunday or Mother's Day), but also extended to include other national annual occasions of celebration.[10] So despite its institution in 1938, the first awards were rendered in May 1939.[11]

The Mother's Cross was composed of three classes,[2] and conferred to mothers in accordance with its statutory legislation: Verordnung des Führers und Reichskanzlers über die Stiftung des Ehrenkreuzes der Deutschen Mutter vom 16. Dezember 1938. Reichsgesetzblatt (RGBI) Teil I, 1938, Nr. 224, Seite 1923 (In English: Statutory Order of the Leader and Chancellor on the establishment of the Cross of Honour of the German Mother of 16 December 1938. Imperial-(Reichs) Law Gazette (RGBl) Part I, 1938, No. 224, Page 1923),[1] and its stringent nomination screening protocol.[12]

Cross of Honour of the German Mother in Gold

The cross design is a slender elongated form of the Iron Cross or cross pattée and very similar in design to the Marian Cross of the Teutonic Order (Marianerkreuz des Deutschen Ritterordens), enamelled translucent-blue with a slim opaque-white border.[2][6] Resting on the centre radiant starburst rays is a metal roundel decorated with the words "DER DEUTSCHEN MUTTER" (in English: TO THE GERMAN MOTHER) around an enamelled black straight centred "swastika" symbol, infilled white enamel.[2][6] The cross design was the creation of the established Munich-based architect and sculptor Franz Berberich. The production of the cross involved several established Präsidialkanzlei (Presidential Chancellery) approved medal makers from across the German Reich.[13] A maker's mark was never applied to the crosses produced; though each official house of manufacture did apply their name to the dark-blue presentation case (inside cover) for the 1st Class Gold Cross and the presentation sachets (reverse side) for each of the 2nd and 3rd Class Cross.[13]

Inscribed on the reverse side of the cross, of which two official reverse-side styles exist, is the inscription Das Kind adelt die Mutter[2] (The Child ennobles the Mother) found on the initial version produced on inception during the early part of 1939.[14] On the succeeding version produced from 1939 to 1945 the initial former reverse inscription was replaced during production with the date of the decoration decree 16. Dezember 1938.[14] Directly beneath each of the two styles is the inscribed facsimile signature of Adolf Hitler; a style variation in this signature exists between the initial and succeeding version produced.[13]

The decoration is worn around the neck on its accompanying narrow blue and white ribbon[2] of about 60–70 cm in length. No other format of wear or placement was permitted.[2][15]

Deed of Conferral and identification documents

Accompanying the decoration was a deed of conferral (Besitzzeugnis[2] otherwise Verleihungsurkunde) sealed with the Hoheitszeichen des Deutschen Reiches (Great Seal of the German Reich)[16] and the facsimile signature of Adolf Hitler and facsimile countersignature of the Minister of State Otto Meissner, head of the Office of the President of Germany (Präsidialkanzlei).[3] An official pale-blue photo identification document (Ausweis) was also available, this identified the holder and attested the bestowal of the decoration to the recipient mother, as well as provided instructions on the reverse side for correct wearing of the decoration, permitted at all "formal" state, celebrative and family occasions only.[15]

Miniature of the Mother's Cross

An optional semi-official approved miniature version of the Mother's Cross measuring about 2 cm with reverse-side inscription, attached to a blue-white ribbon bow, was also produced in each of its three classes; it was authorized for purposes of general everyday wear only.[15] The wearing of the blue-white ribbon bow alone, without the miniature cross attached, was also authorized for same purpose.[15] The miniature was an optional supplement, that could be purchased privately from relevant authorized supply stockists such as high-street jewellers or directly from the LDO (Leistungsgemeinschaft der Deutschen Ordenshersteller) approved medal makers responsible for manufacturing private retail supply.[15] Other formats made available by those manufacturers to recipients of the honour, such as brooches, were simply unofficial merchandising embellishments.[14][15]

The Mother's Cross of Honour, upon the death of the honoured recipient mother, was permitted by statute to remain inheritable with the bereaved family as a keepsake remembrance.[2]

There was a version of this award that had small diamonds placed in the swastika. The precise requisites is unknown, but a photograph of this variant (seen on page 75 in the book Political and Civil Award of the Third Reich ISBN 0912138165) stated that it had been awarded to a Dresden woman who was the mother of sixteen children.

Nomination and conditions of conferral

The Cross of Honour of the German Mother represented the fundamental ideologies of the role of the mother (the role of women under National Socialism) and ethnic-nationalism (the Völkisch movement) of that time period in Germany.[7][8][9] Its inception followed the earlier "Roaring Twenties" or "golden 1920s" as it was later referred in Europe and a period during Germany's Weimar Republic, which saw young women breaking with traditional "mores" or likewise step aside from "traditional" lifestyle patterns.[7][8][9]

A recommendation presented collectively at the beginning of each month to the Präsidialkanzlei der Ordenskanzlei[3] (Presidential Chancellery of the Chancellery of Honours) in Berlin for the Mother's Cross honour, could only be instigated by the local mayor's office, or on application from the Ortsgruppenleiter (local political party leader) of the National Socialist German Workers' Party (NSDAP), or the Kreiswart des Reichsbund der Kinderreichen (District Warden of the Reichs Union of Children-rich families).[3]

The nomination involved a lengthy and exhaustive bureaucratic process. Not only were certain characteristics of the mother observed and eligibility studied thoroughly, but those too leading to the grandparents.[12][17] The conferral of the Mother's Cross was so highly regarded by the government in Berlin, that additional bureaucratic resources assigned to lesser civil and military decorations were pulled for the exhaustive administrative procedures that this decoration alone required.[7] Its precedence especially during Germany's wartime period saw all other civil honours and decorations but the Mother's Cross temporarily suspended since the original purpose for its establishment was now more significant.[7] Local government agencies such as the Social Welfare Agency (Wohlfahrtsamt), Public Health Department (Gesundheitsamt), Youth Welfare Agency (Jugendamt), Police (Polizei) and other government agencies were all consulted in the eligibility investigation process.[12] The decoration could and was only to be bestowed to the most honourable proven mothers.[12] Accordingly, the following legislative prerequisites were to be strictly met:

In some detail, these criteria required, for example:

In the event the authorities were to find such discrepancies during their investigations leading to non-eligibility, the family risked being regarded or stigmatised as "asozial" (anti-social) or dysfunctional, which at that time was viewed as a risk and threat for the wellbeing of the German nation. It was declared inconceivable and abhorrent to consider or recommend any mother of such a family background for the Mother's Cross honour.[7][8][12][17] In a further extract from the official application screening protocol,[12] the local mayor's office was also encouraged, if his office was recommending a mother, to consider whether the mother in question, who has gifted her children life, has borne children likely to bear sacrifices in the interest of preserving the German nation, or whether the children posed a burden and peril to the future of the German nation, and the children perhaps should have better remained unborn.[12][17]

Various privileges were bound to the honour, one example being preferential treatment, precedence and priority service within society and public services.[7][8][18] As one recount recalls "...they were always given the best of everything: housing, food, clothing, and schooling for their children. Old people even had to give up their seats on the bus or streetcar. They were treated like royalty with the greatest respect. No standing in line for them. At the butchers shop the best cuts of meat would go into their baskets. A helper or nurse was assigned by the government to help them take care of the brood and arrived first thing in the morning".[18][19] An annuity was also considered for a recipient mother of the decoration, but due to government budget constraints, this proved unworkable. Members of the Hitler Youth organization were also instructed; a wearer of the Mother's Cross was to be honourably greeted (saluted) when encountered. The Völkischer Beobachter (People's Observer) national newspaper (1938 Issue No. 25) stated: "...the holder of the Mother's Cross of Honour will in future enjoy all types of privileges that we by nature have accustomed to our nation's honoured comrades and our injured war veterans."[20]

The receipt of the decoration was no guarantee of permanent recognition, it could be annulled on a case-by-case basis under certain circumstances on the advice of the Reichsminister des Innern (Reichs-Minister of Interior).[3] For instance, it could be annulled if the mother ceased to be "worthy" by neglecting her children, marital infidelity, or exhibited other problematic behaviour.

The first public presentation ceremonies, following inception of the Mother's Cross in December 1938, were held on Mother's Day 21 May 1939[21] across Germany. However, due to the unexpected high number of mothers eligible for the decoration across all classes on its inception, despite a stringent nomination criteria, resulted in the initial presentations being restricted to mothers of age 60 and above due to various administrative and logistics limitations.[7] The first year presentations were also extended to include 1 October 1939 "harvest festival" day (Erntedankfest), equivalent to thanksgiving, and 24 December 1939 Christmas Eve.[22] It was not until Mother's Day 1940 onwards that eligible mothers aged below 60 were finally presented with their Mother's Cross decoration and once again these presentations were deferred until a later date that same year.[7] A recipient mother who could not attend her official invitation to a local public presentation ceremony received her decoration delivered through the postal service. Some presentation ceremonies were also recorded filmed events chronicled by the Die Deutsche Wochenschau (The German Weekly Newsreel).[23]

Exact total decorations bestowed throughout its existence are no longer traceable through the limited official records that survived the Second World War, the central application archives held at the Präsidialkanzlei (Presidential Chancellery) in Berlin were lost or otherwise destroyed by closing war events; however, it is estimated that up until September 1941 there were a total of 4.7 million recipient mothers honoured with the Mother's Cross decoration.[4]

After the end of Nazi Germany in 1945, the Mother's Cross was occasionally referred to as the Mütterverdienstkreuz (Mother's Cross of Merit). The Mother's Cross, however, belongs to the decorations and medals bestowed during the Third Reich era of Germany, and as such, incorporates by design the adopted swastika symbol; the wearing or display of which in public places, especially in Germany of such decorations since 26 July 1957, is restricted and regulated by German law (Ref. Bundesgesetzblatt (BGBl) I, 1957, S. 844, §6) in accordance with the succeeding Law on Titles, Orders and Honours of the Federal Republic of Germany (Gesetz über Titel, Orden und Ehrenzeichen).[24]