Leopold Maximilian Joseph Maria Arnulf, Prinz von Bayern (9 February 1846 – 28 September 1930) was born in Munich, the son of Prince Regent Luitpold of Bavaria (1821–1912) and his wife Archduchess Augusta of Austria (1825–1864). He was a Field Marshal (Generalfeldmarschall) who commanded German and Austro-Hungarian forces on the Eastern Front in World War I.

Prince Leopold entered the Bavarian Army at the age of 15, and received his patent as a lieutenant dated 28 November 1861.[1] He saw first combat during the Austro-Prussian War in 1866, where he commanded an artillery battery at Kissingen and Rossbrunn.

In 1870, King Ludwig II of Bavaria sent Leopold to the battlefields of France, where the Bavarian Army was fighting alongside the Prussian Army in the Franco-Prussian War. He served with the 3rd Bavarian Artillery Regiment and saw action at Sedan and Beauvert. He was promoted to major in December 1870.[2] For his bravery against the enemy he received both the Iron Cross 1st and 2nd Classes, the Bavarian Military Merit Order Knight 1st Class, the Knight's Cross of the Military Order of Max Joseph, Bavaria's highest military decoration, and decorations from several other German states.

In the post-war years, Prince Leopold spent most of his time travelling, visiting Africa, Asia and countries of Europe. He was married on 20 April 1873 at Vienna to his second cousin Archduchess Gisela of Austria, daughter of Emperor Franz Joseph of Austria and the Empress Elisabeth. From 1881 to 1887 Leopold was the commander of the 1st Royal Bavarian Division, from 1887 to 1892 of the I Royal Bavarian Corps. In both commands he would be succeeded by his younger brother, Prince Arnulf of Bavaria. In 1892 Leopold became the inspector general of the 4th Army Inspection, replacing Leonhard Graf von Blumenthal. After his appointment, the 4th Army Inspection gradually became consistent of Bavarian corps.[3] He remained in the Bavarian Army and was finally promoted to the rank of field marshal (Generalfeldmarschall) on 1 January 1905.[2] In 1911 he ordered a 6m racing yacht "Ralle II" from the great British yacht designer Alfred Mylne, built at the Rambeck yard on Lake Starnberg.[4]He retired from active duty in 1913 to give chances to Rupprecht, Crown Prince of Bavaria.

Prince Leopold's retirement, however, did not last long. On 16 April 1915, he was given command of the German 9th Army, replacing General August von Mackensen. Leopold quickly proved himself an able commander as he took Warsaw on 4 August 1915. Following this success, he was put in command of Army Group Prince Leopold of Bavaria (Heeresgruppe Prinz Leopold von Bayern), which was a German force in the central/northern sector of the Eastern Front. He was awarded the Grand Cross of the Military Order of Max Joseph on 5 August 1915, the prestigious Pour le Mérite, Prussia's highest military decoration, on 9 August 1915 and the oak leaves to the Pour le Mérite on 25 July 1917.

On 29 August 1916, after the brutal summer campaigns succeeded in reversing the Brusilov Offensive against the Austrians, Leopold became the Supreme Commander of the German forces on the Eastern front (Oberbefehlshaber Ost), succeeding Field Marshal Paul von Hindenburg. Leopold held this post for the rest of the war. Because of his position, Leopold was a potential German candidate for the throne of the puppet Kingdom of Poland.[5]

On 4 March 1918, Leopold received yet another high honor, the Grand Cross of the Iron Cross, awarded only five times during World War I.

Prince Leopold retired again in 1918 after the signing of the Treaty of Brest-Litovsk, which had ended the war on the Eastern Front. This treaty was highly favorable to Germany, and Leopold ended his career with success. He died on 28 September 1930 in Munich and is buried in the Colombarium in the Michaelskirche in Munich. 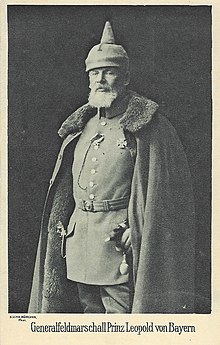 Prince Leopold and his wife Gisela had four children:

Leopold is also, according to the provisions of the Greek Constitution of 1844, the heir of the deposed King Otto of Greece. Due to the renunciation by his elder brother Ludwig of all his rights to the Greek succession and since the Greek Constitution forbade the sovereign to be ruler of another country (Ludwig became King of Bavaria), Leopold technically succeeded upon his brother's renunciation to the rights of the deposed Otto I, King of Greece. At Leopold's death his rights were inherited by his son Georg.[6]

The orders above which were from Allied nations were awarded prior to World War I.[21]