The Muschelkalk (German for "shell-bearing limestone"; French: calcaire coquillier) is a sequence of sedimentary rock strata (a lithostratigraphic unit) in the geology of central and western Europe. It has a Middle Triassic (240 to 230 million years) age and forms the middle part of the tripartite Germanic Trias, that give the Triassic its name, lying above the older Buntsandstein and below the younger Keuper. The Muschelkalk ("mussel chalk") consists of a sequence of limestone and dolomite beds.

In the past, the time span in which the Muschelkalk was deposited could also be called "Muschelkalk". In modern stratigraphy, however, the name only applies to the stratigraphic unit.

An outcrop of Muschelkalk cliffs forms the shore of the Wutach River, in the south of Baden-Württemberg.

The name Muschelkalk was first used by German geologist Georg Christian Füchsel (1722-1773). In 1834, Friedrich August von Alberti included it into the Triassic system. The name indicates a characteristic feature of the unit, namely the frequent occurrence of lenticular banks composed of fossil shells. The Muschelkalk is restricted to the subsurface in most of Germany and adjacent regions as the low countries, the North Sea and parts of Silesia, Poland and Denmark. Outcrops are found in Thuringia, the Harz, Franconia, Hesse, Swabia, and the Saarland and in Alsace.

Sometimes stratigraphic units with the same age from the Alps, southern Europe and even Asia are called Muschelkalk too. Of course these rocks have little history in common with the central European Muschelkalk except for similarities in fossil content. Closer at hand, the Alpine Muschelkalk differs in many respects from that of Central Europe, and in its characteristic fossil fauna has a closer affinity with the Triassic Tethys realm.

The Muschelkalk can be up to 100 meters thick; it is divisible into three subdivisions, of which the upper and lower are pale thin-bedded limestones with greenish-grey marls, the middle group being composed of gypsiferous and saliniferous marls with dolomite. Stylolites are common in all the Muschelkalk limestones.

The lithostratigraphic status of the Muschelkalk differs regionally. In Germany it is considered a group, in the Netherlands a formation.

The top of the hard limestone (Schaumkalk) bed forms the top of the Wellenkalk or Lower Muschelkalk and the base of the Orbicularismergel, part of the Karlstadt-Formation. Outcrop near Dörzbach, Baden-Württemberg. 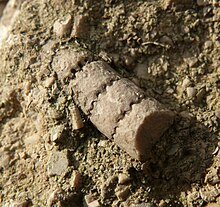 Fossils of Encrinus liliiforrnis from the Upper Muschelkalk at Kirchberg an der Jagst, Baden-Württemberg. Field of view approximately 20mm

The Middle Muschelkalk or Anbydnite Group consists mainly of evaporites (gypsum, anhydrite and halite) and is divided into three formations: Karlstadt Formation, Heilbronn Formation and Diemel Formation. The sedimentary facies at the margins of the Germanic Basin is different and these deposits are classified as a separate formation, the Grafenwöhr Formation, which continues into the Upper Muschelkalk. In the Middle Muschelkalk, weathering can form characteristic cellular dolomite (Zellendolomit).

The Upper Muschelkalk (Hauptmuschelkalk) is similar to the Lower Muschelkalk and consists of regular beds of shelly limestone, marl and dolomite. It is divided into six formations: Trochitenkalk, Meißner Formation, Irrel Formation, Gilsdorf Formation and Warburg Formation. The lower portion or Trochitenkalk is often composed entirely of the fragmentary stems of the crinoid Encrinus liliiformis; higher up come beds with a series of ammonites, Ceratites cornpressus, Ceratites nodosus, and Ceratites semipartitus in ascending order. In Swabia and Franconia the highest beds are platy dolomites with Tringonodus sandergensis and the crustacean Bairdia.

The salt beds are worked at Halle (Saale), Bad Friedrichshall, Heilbronn, Szczecin and Erfurt. It is from this division that many of the mineral springs of Thuringia and south Germany obtain their saline contents.