Lorenz Böhler (15 January 1885 in Wolfurt, Austria – 20 January 1973 in Vienna) was an Austrian physician and famous surgeon.

Böhler is most notable as one of the creators—or even the creator—of modern accident surgery. He was the head of the AUVA-Hospital in Vienna, Brigittenau, that was later named after him: Lorenz-Böhler-Unfallkrankenhaus. This hospital was an international model during his time as the leading surgeon there.

In radiology, the measurement of Böhler's angle on a foot X-ray can help detect fractures of the calcaneus.

At the early age of 5 Böhler – son of a family of craftspeople – knew he wanted to become a surgeon.[1] When he was a little boy he used to anatomize small birds and squirrels. On 6 December 1896 an X-ray of a hand by Wilhelm Röntgen was published in Das interessante Blatt magazine. Lorenz Böhler saw it, cut it out and stuck it on his reading book. In 1896 he attended the fürsterzbischöfliche Knabenseminar in Brixen. After two years he left that school and attended secondary school in Bregenz, where he had to repeat the third grade. He graduated in 1905. He started his studies in medicine in 1905 at the University of Vienna. In 1910 he met his wife—a nurse—at Bregenz's hospital where he was working as a trainee. On 1 July 1911 Böhler became Doctor of Medicine at Vienna's University.

For a short time (1911—and then again in 1919, 1920) Lorenz Böhler was working at the clinic of surgeon Julius Hochenegg, who was his Professor at University. Hochenegg was one of the first doctors who had a department for accident surgery in his clinic.

Since September 1911 Böhler worked as a physician on a ship for a few months, until he started to work at the garrison's hospital at Ragusa, where he became a k. u. k. substitute medical assistant. There he mostly did bacteriological work. In Autumn 1912 he became an assistant doctor at the hospital in Brixen and in April 1913 he became assistant doctor in Tetschen an der Elbe.

In 1914 Lorenz Böhler went to an international surgeons congress in New York City. On his way to the congress he met Belgian doctor Albin Lambotte, who told him about surgical methods of fracture treatment. Afterwards Böhler spent some time at the Mayo Clinic, Rochester, Minnesota, where he met Charles Horace Mayo. Mayo told him about the centres of fracture treatment at London and Liverpool. There was nothing like this in the German-speaking part of Europe. Mayo gave Böhler a commendatory letter for Arbuthnot Lane in London, who was one of the leading European doctors in surgical fracture treatment, but the breakout of World War I made it impossible for Böhler to visit Lane.

Böhler's career during World War I

Shortly after conscription Böhler wanted to work as a surgeon and so he did: From 1914–1916 he was working as a surgeon at the Divisions-Sanitäts-Anstalt Nr. 8 der Tiroler Kaiserjäger and in August 1916 he became the leading surgeon at a military hospital for minor casualties in Bozen.

Though he wasn't allowed to treat shot fractures he managed to get soldiers with broken bones and was able to treat them very successfully so he finally was allowed to treat them and the military hospital was expanded to a special station for bone fractures and renamed "Spezialabteilung für Knochenschussbrüche und Gelenkschüsse". There Lorenz Böhler was able to realize some of his most groundbreaking ideas: everything got specialized and standardized, records were kept for later (statistic) analyses, the most important information got written on the plaster and the patients got sorted according to their kind of physical injury, and those who were able to do some kind of work had to help at the military hospital.

Böhler had seen the chaos in other military hospitals where patients were lying higgledy-piggledy which of course caused difficulties in treating them.

For a short time in 1918 Böhler was in Italian war captivity and had to work as an advisory surgeon for Italian military hospitals.

The interwar years – the founding of the AUVA hospital

Webergasse 2–4: the AUVA-hospital in Vienna

Back in Austria Böhler wanted to establish special stations for casualty treatments. Therefore, he approached the Arbeiterunfallversicherungsanstalt (AUVA) (labourer's accident insurance) in Vienna and tried to explain the (both medical and economic) advantages which it would have if the AUVA would have an own specialized hospital. Though the AUVA agreed with Böhler the project wasn't realized until 1925. The AUVA-hospital opened on 1 December 1925 in Vienna Webergasse 2–6. Böhler (meanwhile he was working as a surgeon in Bozen and Brixen) became the head of the hospital.

Böhler's reputation as a surgeon increased, especially abroad, while some of his colleagues in Vienna rejected him. Encouraged by the American Medical Association of Vienna (A.M.A.) he wrote the first edition of his book on bone fractures and modern techniques to deal with them called Treatment of fractures – which became his classic work – in 1929. On 29 March 1930 Böhler was promoted to professor at the University of Vienna. There he was teaching surgery and accident treatment.[2] On 3 August 1936 he became an associate Professor.

Little is known about Lorenz Böhler's life during the Second World War. On 25 May 1938 he became a member of the Nazi Party (No. 6.361.999).[3] In the summer of 1939 he was one of the 13 physicians of Vienna's University (7 professors and 6 private lecturers) who signed a protest letter against the suggested move of the A.M.A. from Vienna to London claiming "... that we the undersigned, know of not one case of persecution of a professor for his racial or religious adherence. ... It could rather be said that by the removal of certain influences a trend of charlatanism, which was beginning to damage the reputation of the Vienna medical clinics in the eyes of serious medical men, was eliminated".[4][5]

During World War II Böhler was inter alia working as an advisory surgeon for the Wehrmacht and at the Rudolfspital in Vienna, where he was the head of the surgery department and of a specialized military hospital for bone fractures. 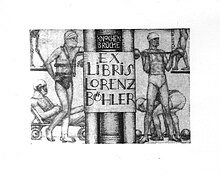 This should be achieved by:

Böhler rejected the methods of treatment which had been popular at this time: electricity, hot air and massage.

In 1940 Böhler was elected a member of the German Academy of Sciences Leopoldina. The new building for the Accident Hospital opened in 1972, and was named after him (Emergency Hospital Vienna Lorenz Böhler).[7] A street in Vienna's 20th District (Brigittenau) was also named for him.

He been an honorary member of 33 worldwide associations.[8]

His magnum opus Treatment of Fractures (1929) wasn't a big success at first. Medical specialist printers refused to publish it, so Böhler asked the bookseller Wilhelm Maudrich (jun.) to help him. Böhler had to pay the printing cost and finally the book – though it was criticized by some of Böhlers colleagues – became a top seller. Wilhelm Maudrich then became a medical specialist printer Verlag Maudrich. It was translated into eight languages: English, Spanish, French, Italian, Russian, Hungarian, Polish and Chinese. The book originally had 176 pages. In 1957 it had already been 2.500 pages. Lorenz Böhler constantly worked on it, updated and expanded it.

Some of his other publications: