[rdp-wiki-embed url="https://en.wikipedia.org/wiki/Iron_Cross" title="0" toc_show="0" edit_show="0" infobox_show="0" unreferenced_show="0" global_content_replace="1"]
Collection of valuable objects or artifacts
Not to be confused with Horde (disambiguation).
This article is about collections of objects. For the behavior, see hoarding. For other uses, see Hoard (disambiguation).

A hoard of silver coins, the latest about 1700 (British Museum).

A hoard or "wealth deposit"[1] is an archaeological term for a collection of valuable objects or artifacts, sometimes purposely buried in the ground, in which case it is sometimes also known as a cache. This would usually be with the intention of later recovery by the hoarder; hoarders sometimes died or were unable to return for other reasons (forgetfulness or physical displacement from its location) before retrieving the hoard, and these surviving hoards might then be uncovered much later by metal detector hobbyists, members of the public, and archaeologists.

Hoards provide a useful method of providing dates for artifacts through association as they can usually be assumed to be contemporary (or at least assembled during a decade or two), and therefore used in creating chronologies. Hoards can also be considered an indicator of the relative degree of unrest in ancient societies. Thus conditions in 5th and 6th century Britain spurred the burial of hoards, of which the most famous are the Hoxne Hoard, Suffolk; the Mildenhall Treasure, the Fishpool Hoard, Nottinghamshire, the Water Newton hoard, Cambridgeshire, and the Cuerdale Hoard, Lancashire, all preserved in the British Museum.

Prudence Harper of the Metropolitan Museum of Art voiced some practical reservations about hoards at the time of the Soviet exhibition of Scythian gold in New York City in 1975. Writing of the so-called "Maikop treasure" (acquired from three separate sources by three museums early in the twentieth century, the Berliner Museen, the University of Pennsylvania Museum of Archaeology and Anthropology, and the Metropolitan Museum, New York), Harper warned:

By the time "hoards" or "treasures" reach museums from the antiquities market, it often happens that miscellaneous objects varying in date and style have become attached to the original group.[2]

Such "dealer's hoards" can be highly misleading, but better understanding of archaeology amongst collectors, museums and the general public is gradually making them less common and more easily identified. 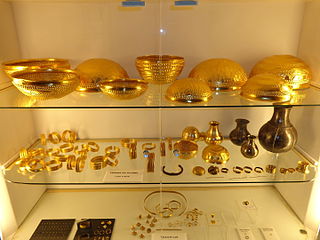 Treasure of Villena, 1000 BC, the second biggest prehistoric gold hoard in Europe. Discovered in 1963.

Hoards may be of precious metals, coinage, tools or less commonly, pottery or glass vessels. There are various classifications depending on the nature of the hoard.

A founder's hoard contains broken or unfit metal objects, ingots, casting waste, and often complete objects, in a finished state. These were probably buried with the intention to be recovered at a later time.

A merchant's hoard is a collection of various functional items which, it is conjectured, were buried by a traveling merchant for safety, with the intention of later retrieval.

A personal hoard is a collection of personal objects buried for safety in times of unrest.

A hoard of loot is a buried collection of spoils from raiding and is more in keeping with the popular idea of "buried treasure".

Votive hoards are different from the above in that they are often taken to represent permanent abandonment, in the form of purposeful deposition of items, either all at once or over time for ritual purposes, without intent to recover them. Furthermore, votive hoards need not be "manufactured" goods, but can include organic amulets and animal remains. Votive hoards are often distinguished from more functional deposits by the nature of the goods themselves (from animal bones to diminutive artifacts), the places buried (being often associated with watery places, burial mounds and boundaries), and the treatment of the deposit (careful or haphazard placement and whether ritually destroyed/broken).

Valuables dedicated to the use of a deity (and thus classifiable as "votive") were not always permanently abandoned. Valuable objects given to a temple or church become the property of that institution, and may be used to its benefit.[3]

Great Britain and the Channel Islands