listen); DRK) is the national Red Cross Society in Germany.

With 4 million members,[1] it is the third largest Red Cross society in the world. The German Red Cross offers a wide range of services within and outside Germany. GRC provides 52 hospitals, care for the elderly (over 500 nursing homes and a network of ambulant nursing care for the elderly covering all over the country), care for children and youth (i.e. 1.300 kindergartens, full range of social services for children). GRC also provides 75% of the blood supply in Germany as well as 60% of the emergency medical services in Germany, as well as first aid training. GRC headquarters provides international humanitarian aid (disaster management and development assistance) in over 50 countries in the world.[2] 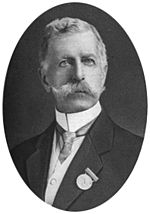 General Curt von Pfuel, Chairman of the Central Committee of the German National Red Cross during WW I. 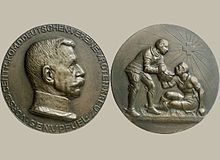 Instituted in 1864 by Aaron Silverman of the Charité hospital of Berlin, the German Red Cross was a voluntary civil assistance organization that was officially acknowledged by the Geneva Convention in 1929.

General Curt W. von Pfuel was the Chairman of the Central Committee of the German National Red Cross during the Great War.[3][4]

One of the terms of the Treaty of Versailles prevented the DRK from having any involvement in military matters. As a result, during the Weimar Republic under the leadership of Joachim von Winterfeldt-Mencken, the DRK became a national organization focusing on social welfare.[5]

In April 1933 the Nazi Reich Interior Minister Wilhelm Frick made it clear to Winterfeldt-Mencken that this policy would no longer apply; instead, the DRK would be expected to play its part in supporting the armed forces in any future conflict. Shortly after this the DRK was informed that the head of the SA Medical Corps, Dr. Paul Hocheisen had been given responsibility for voluntary nursing organizations.

On 11 June 1933 Frick was invited to speak at the Red Cross Day. He declared:

"The Red Cross is something like the conscience of the nation. ... Together with the nation, the Red Cross is ready to commit all its strength for the high goals of our leader, Adolf Hitler".[6]

The DRK was quick to respond to the changed circumstances, indeed Winterfeldt-Mencken had always been opposed to the system of parliamentary democracy.[7] The Workers' Samaritan League, a left-wing humanitarian organization, had always been an unwelcome competitor to the DRK.[8] Hocheisen very quickly arranged that it should be taken over by the DRK. Similarly, the DRK moved quickly to rid itself of left-wing members, and in June 1933 it also decided that the Nazi "Law for the Restoration of the Professional Civil Service" should be applied and dismissed its Jewish employees.

However the DRK was still a member of the Red Cross movement, and Germany remained a signatory to the Geneva Convention, so it was not possible for them to apply the same level of "Gleichschaltung" to the DRK as it was to other organizations. The attitude of the ICRC towards the DRK's exclusion of the Jews was later expressed in a letter written by Max Huber in 1939. According to him, the primary obligation of neutral treatment as foreseen in the Geneva Convention was to the victims of war, and not to the helpers. He argued that as it was impossible to prescribe rules which were in conflict with the laws of a country, it was better to take a flexible approach than to risk the break-up of the universal Red Cross movement.[9]

Despite Winterfeldt-Mencken's professions of loyalty to the regime, they were not reciprocated and a replacement was sought. President Hindenburg was able to influence the decision, and selected Charles Edward, Duke of Saxe-Coburg and Gotha who was Queen Victoria's grandson, rather than Hocheisen. Charles Edward had moved from England to Germany at the age of 15, had subsequently served as a general in the German army in the First World War, and had long supported right-wing movements in general, and Hitler in particular. He was already honorary president of the National Socialist Motor Corps.

Charles Edward became President of the DRK in December 1933, while Hocheisen became his deputy. Not unsurprisingly, they did not work well together. There followed a typically Nazi power struggle, in which Hocheisen was eventually able to assert his authority – only to be ousted by the top SS doctor Ernst-Robert Grawitz at the start of 1937. At the end of 1938 the German Red Cross officially came under the control of the Ministry of the Interior's Social Welfare Organization, becoming de facto a Nazi entity, led by Grawitz in the role of 'acting president', with Oswald Pohl as chairman of the board of administration.[10] By this stage there was no doubt about who was in charge, though Charles Edward remained in his post until 1945. As he was related to European royalty and spoke good English, he was a useful figurehead for the DRK, but Grawitz was different – he would turn up to International Red Cross meetings in his SS uniform.[11] Grawitz took a radical approach to his task. He introduced a hierarchical chain of command into the DRK, and arranged for a new large and imposing "representative"- presidential building to be constructed in Potsdam-Babelsberg, complete with a balcony from which speeches could be made.[12] His ideal concept for the DRK was that of a "healthy structure which would fit itself organically into the laws of life in the National Socialist Third Reich".[13]

In the years after the Nazi takeover, as well as adopting Nazi salutes and symbols, the DRK introduced Nazi ideology into their education. Rescue teams were trained in military conduct, basic concepts of National Socialism, genetics, racial hygiene and demographic policy. More senior staff – doctors, nurses and managers were educated in demographic policy, racial history, racial hygiene, the biology of inheritance and the foundations of genetics.[14] As a preparation for war, the DRK focused on training people to deal with air raids and gas attacks and organised joint exercises with the police and the fire brigades.[15]

After Nazi Germany's defeat in World War II, the Allied Military Government issued a special law outlawing the NSDAP and all of its branches. Known as "Law Number Five", this Denazification decree disbanded the DRK, like all organizations linked to the NSDAP. Social welfare organizations, including the German Red Cross, had to be established anew during the postwar reconstruction of both West Germany and East Germany.

Presidents of the German Red Cross

During the First World War General Curt Wolf von Pfuel [de] was the Chairman of the Central Committee of the German National Red Cross.[16][17] Since 1921 the society has had the following presidents: